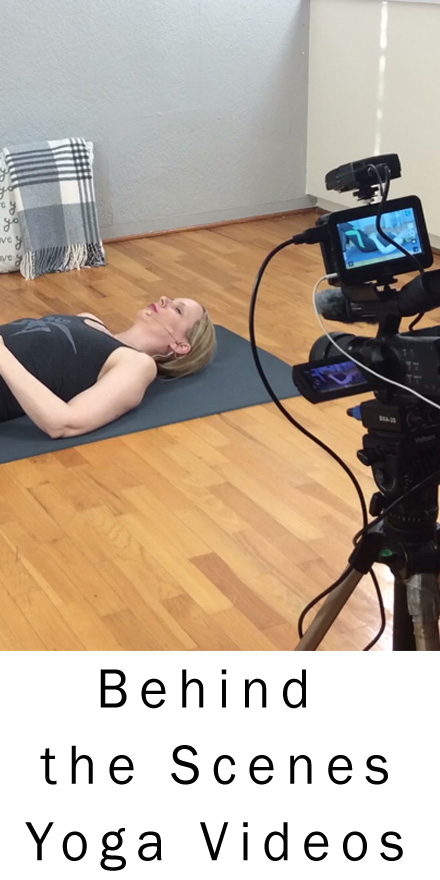 This past week we spent three days filming the first 6 of 14 classes of a Yoga for Perfectionism series for the Yoga with Melissa channel. This is something that is called batch filming in the industry. We thought we would take you behind the scenes and show you what is involved in filming hatha yoga classes, yin yoga classes and restorative yoga classes for our Yoga with Melissa channel, from coming up with the idea for a series all the way to publishing the one hour yoga video for you on YouTube.

So many of you ask how I come up with my ideas for yoga videos or yoga series. Mostly I am listening to you and your experience of yoga practice as well as my own inspiration from my own yoga and meditation practice. In this particular case, one of my students Kirsti mentioned something about perfectionism. She may have even requested a class on perfectionism and it lit something up inside of me and I decided to create a series on perfectionism.

Next I comes the research phase which begins by seeking out resources. I usually start on amazon and also my local library. For this series I settled on Pavel Somov’s book Present Perfect. It is unusual for me to settle on one book, usually I am drawing from multiple resources. I take notes and from the notes usually some sort of a class outline reveals itself. Also during this research phase I am reading lots of poetry books and gathering poetry for yoga classes.

Then comes the class planning phase. I look at the class outline and decide what kind of class would align with the class themes. While many of you love the yin and restorative yoga classes, I have had some questions about why I don’t teach more hatha yoga classes. The answer is balance, for both myself and you. It is not healthy to have all yang classes, for you or for me. So I make sure to have a balance of yin and yang classes. This is particularly important for me when I am filming, but also for the arch of teaching the course as well. If I am always hammering out yang classes, then you are going to burn out. You will never have a chance to draw the sweet energy of yin into your system.

Once I have written the classes, there is a lot of technical writing that has to happen for YouTube, our website, and social media. The time spent researching and writing a series probably takes about a month. Honestly the actual filming of the class is the smallest portion of time, although it can take 2-3 hours to film a one hour class.

In the video you will see is transforming our apartment from our home to a film studio by setting up lighting and sound. There are also other things to consider like hair, makeup and outfits. All these things take time and energy. In fact, I have a pile of clothes on a chair in my bedroom that would be considered this week’s wardrobe waiting to be put away!

After the filming, everything gets handed over to Tim. Tim is in charge of editing the videos, rendering them and uploading them to YouTube. Tim also looks after the comments section on YouTube. As much time as I spend preparing the series, Tim spends on each episode after it has been filmed.

It is an enormous effort to produce a one hour yoga show each week. This is why we batch film several in one week. Putting out that effort all at once, allows us to focus on our members and membership community the rest of the time. 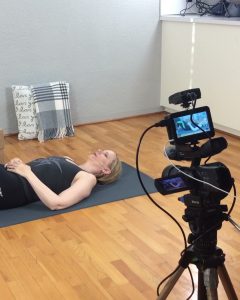 It is an honour for both Tim and I to be able to do work that we love and serve you all in this way. Thank you for allowing us to live this life.

If you have any questions about the process, feel free to leave us a comment in the comment section.