What do the yamas and niyamas have to do with bicycles and the thoughts of buying a new one? As it turns out, a lot! A few weeks ago I started to think about buying a “cruiser” bicycle. Specifically I was interested in this one: 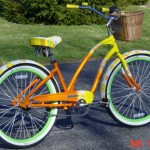 I wanted to be able ride more upright and I was justifying it so that it wouldn’t hurt my neck and shoulders and that would surely cut down on my migraines. But I didn’t end up getting a brand new bike, despite the encouragement from many of you on facebook! Instead I refurbished my 20 year old bike to have some of the best features of the cruiser bike along with the best features of my 20 year old bike. The reasons why have everything to do with yoga and the ethical precepts of yoga from the yamas and niyamas.

Firstly, the yama of ahimsa, nonviolence towards the environment. If I had bought the daisy by electra cruiser bike at some point that would have meant two bikes in a landfill instead of just one. Keeping my 20 year old bike and refurbishing it means just one bike in a landfill some day and less violence on the environment.

Secondly, satya, truthfulness. I went and tested the cruiser bikes. I couldn’t find the exact electra daisy cruiser, but the cruisers I tried just weren’t nearly as good as my existing bike. They only had one gear, you had to back peddle to break. If I was honest with myself, my existing bike was a lot better.

Thirdly, aparigraha, non-greed. This is the avoidance of unnecessary acquisition of objects not essential to the maintaining of life or spiritual study. I didn’t need a new bike. I already had a bike! All I needed to do was make my existing bike more comfortable for me!

Finally, the niyama of santosha, contentment. I can be happy with what I have, truly. I have a perfectly good bike that I am very happy with, especially with the adjustments I have made to it to make it according to my specifications now.

So, what did I have done to it? I replaced the seat with a more comfortable seat. I replaced the grips which were completely worn out with grips that keep your wrists in neutral alignment. I had higher handlebars put on so that I can ride upright, just like on a cruiser. I had new tires put on. And I had a complete tune-up done at Northern Cycle in Ajax.
http://www.facebook.com/pages/Northern-Cycle/131120593582413
http://northerncycle.com/