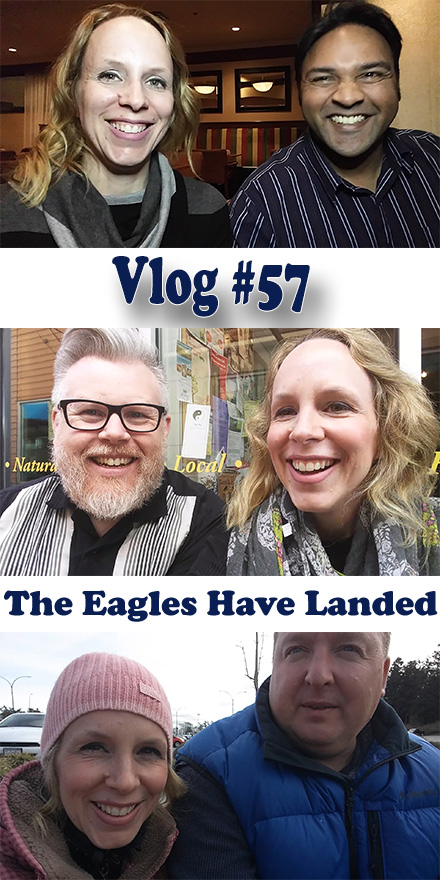 We started the week with some outdoor filming even though it has continued to be cold here in Victoria. Winter and snow and low temperatures still! We filmed in Beacon Hill Park. We toughed it out in the cold to film some Yoga Lifestyle videos for you!

Tim talks to you about his new lens. Which in fairness, I am totally in love with as well now!
Let us know if you have 4K TVs. Do you want us to film in 4K?

When we were out shopping for our veggies in farm country this week we came across a bald eagle and immature eagle feasting on a deer carcass on the side of the road.

Saturday morning we went to the videographers meetup. I think I put my makeup on in the dark that morning! Al Smith, who has an almost daily vlog here in Victoria was at the meetup so we said hello.

Al is a great story-teller in his vlogs, you definitely want to check him out!

Tim has been eating so well over the last few weeks. Can you see how good he looks? Let him know in the comments. He had treat day on Saturday. Tim decided to go to Mosi Bakery for his treat. He had a lemon square. We got Trinity a chocolate croissant. Later I had a compost cookie. Their baked goods and gelato are out of this world.

Trinity’s soccer game was at the Center of the Universe.

Saturday night Tim and I had dinner with Jeff and his wife Kristina. You all know Jeff from Qi Gong for Vitality and our collaborations on YouTube.

I don’t think four people ever laugh so much as when the four of us get together. Subscribe to Jeff’s channel he almost has 1, 000 subscribers.

Thanks for watching, see you next week!