Victoria is one of the most bike friendly cities in the Canada with hundreds of kilometers of bike paths and more being added everyday!

2. Fairmont Hotel. This has long been a bucket list destination for high tea. During the summer months, the Fairmont Empress in Victoria, British Columbia, serves Afternoon Tea to more than 400 people per day. Apparently they serve half a million cups of tea annually!

3. Emily Carr is one of Victoria’s most famous artists. She lived from 1871 – 1945 and was inspired by the first nations people and landscape of the island. This was incredibly avant garde at the time. She would have fit right in now with all the #vanlife instagramers as she had a camper. She also had a monkey.

4. Totem Poles Royal British Columbia Museum. You can visit the outside of the museum and see the totem poles of the first Nation’s people of the west coast. Although people think that all first nation’s people made totem poles, only six West Coast First Nations people actually carved totem poles. Totem poles are carved from cedar because that wood is best at resisting rot. Totem poles are a traditional way of telling the stories of Aboriginal families and clans, and of keeping records of important historical events.

5. The Parliament Buildings – If you can come back at night, the parliament buildings look beautiful all lit up with their 3300 energy efficient lights.

6. Fisherman’s Wharf – Is simply adorable with their 33 resident float homes. We highly recommend the Fish Store for fish and chips.

7. Ogden Point -This is where the locals go to cool off. It is a nice flat 1.6 km (1 mile) round trip walk or jog out to a lighthouse.

8. Beacon Hill Park is home to world’s tallest free standing totem pole. It is here that you can also see the running of the goats. Victoria is known as the city of gardens, because it has a perfect growing environment. The total blooms counted in 2018 was over 3.4 billion. 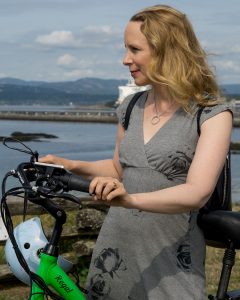 10. Craigdarroch Castle is an example of a “bonanzacastle” which is a fun way of saying a massive house built for entrepreneurs who became wealthy during the industrial age.

(nothing was gifted or sponsored from the shopping)