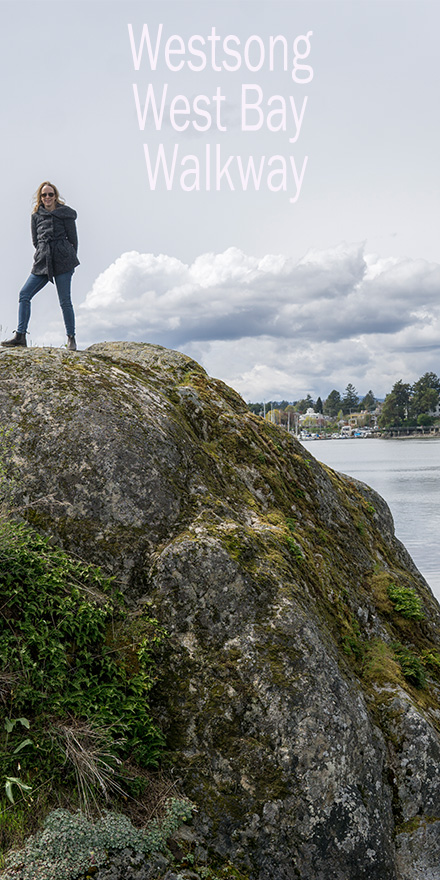 In the early days when the Hudson’s Bay Company arrived in Victoria, Fort Victoria was set up in 1842. While the Songhees Nations of the Coast Salish people lived beside Fort Victoria for a time, eventually they were pushed across the waterways to the west side of the harbour now called West Vic where we will take our walk today.

This is also known as Pallastis or The Place of Cradles, a sacred site for the Songhees First Nations People. When their children had learned to walk, their cradles were placed in ceremony along the Pallastis shore. The ceremony was performed to ensure a long life for the child. If you wanted to strengthen your spiritual path, you would jump into the harbour from Pallastis holding a stone within a ceremony. Pallastis or The Place of Cradles is now known as Songhees Point Park.

The Inner Harbour is incredibly busy. Inner Harbour Air is Canada’s busiest seaplane airport. Anecdotally as a Victorian I can attest to that. In the summer I can tell you the time by when the sea planes start in the morning.

If you get tired you can take a water taxi home. Victoria Harbour Ferry and Water Taxis have been a part of Victoria for 25 years. They have transported over 3 million passengers in the inner harbour.

So under the category of only in Victoria BC, every Sunday at 10:45 am from May through September and every Saturday in July and August the water taxis perform a choreographed water ballet using 5 water taxis. You can even meet the water ballet captains at the Empress Dock after their performance.

You will also be able to see the Float Homes at Fisherman’s Wharf on the Westsong Walkway. Float homes are homes built on flotation systems. This float home neighbourhood was established in 2002. You have to apply to the Greater Victoria Harbour Authority to buy a float home. You also have to pay moorage fees and licensing fees. If your application of ownership is approved you must live in your float home, you cannot rent it out.

Getting there: From the Inner Harbour, walk along Wharf Street and across the Johnson Street Bridge. Follow the footpath on the left and watch for the signs marking the Westsong Walkway. You’ll be walking by the Delta Victoria hotel. If you’re approaching from some other point of origin, like the ferry terminal or bus depot, use Google Maps and make the Delta Victoria your destination.

Beginning at Songhees Point, walk along the Victoria waterfront to West Bay. The walkway is mostly level and is paved so it is wheelchair accessible. At all points along this walk there are views of the harbour. A nice walk if you’re stuck in the city or are unable to tackle more moderate hikes.

Directions: From Downtown Victoria, cross the Johnson St. Bridge into Esquimalt. Turn Left on Songhees Road. There is a small amount of parking near the water. This is only one of several access points. Nearly every road between here and Head St. has an access point.