Hannah from the membership site Also I’ve avoided “om” so far in my yogic experience as I have no idea what the hell it means or is, or why or what?! (I’m analyzing, and I now know why!)

Om is the prime mantra of the higher Self. As such it attunes us with our true nature and higher reality. Om is the sound of the creator, preserver and destroyer of the universe who is also the inner guru and prime teacher of Yoga. It reflects both the manifest and unmanifest Brahman, sustaining the vibration of being, life, and consciousness in all worlds and all creatures. 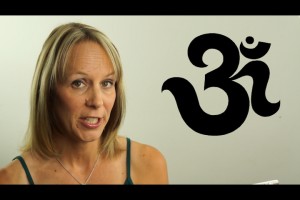 Generally, OM is divided threefold as A, U and M, with A referring to creation, the waking state of Brahma, the creator; U as sustenance, the stream state and Vishnu, the preserver; and M as dissolution, the deep sleep state and Shiva the transformer. More specifically, Om relates to Shiva, the cosmic masculine force.

Om serves to open and clear the mind for meditation. It brings about an ascension and expansion of our energy. It promotes the higher prana and inner light and takes us into the formless realm. It draws the sound current up the spine, through the chakras and out the top of the head. Om also means “yes” and is said to be the sound of assent. It allows us to harmonize with the forces of the universe externally and with our own nature internally. It attunes us to the cosmic reality and the sacred vibratory patterns that arise from it.

Relative to Ayurvedic medicine, Om helps to harmonize the body, prana, mind and sense with the higher Self, Atman or Divine presence within. It connects us with the cosmic healing prana. It brings a deep healing energy into the subconscious mind to remove negative emotions, addictions and compulsions. Relative to Vedic astrology, Om is the sound of the Sun and of the higher light behind all the stars and planets. In Vastu, Om can clear the energy of the home or dwelling and bring in Divine light, grace and knowledge.