In yoga asana land, there are two versions of fish pose.

The first is matsyasana, the backbending fish pose. 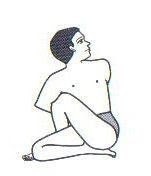 The other is matsyendrasana, the seated twist pose. Both have their own yoga story.

Matsya was the first incarnation of Vishnu, the God of preservation, part of the trinity of Gods including Brahma the creator and Shiva the destroyer. Vishnu knew that the world was about to be destroyed by a great flood and decided to help by incarnating as a fish in a river. At that time, there was a King named Manu who was performing his spiritual practice by the river. The King was using a kamandal – a sacred vessel used for storing waters for prayers. When Manu dipped his kamandal into the river he noticed that he had caught a tiny fish. His first impulse was to place the fish back in the water, but the fish begged him not to throw him back in the river. Manu took pity on the fish and took it back to the palace in the kamandal.

The next day when Manu checked on the fish he was shocked to see that it had grown to fill the entire kamandal. Manu changed the fish to a small tub, but the fish kept growing bigger and bigger. No matter how large the container the fish would grow to fill it. Finally the fish had grown so large that only the ocean could contain it.

Manu realized that the fish must be come kind of sacred deity and bowed down in submission asking the fish for enlightmenment. Finally the fish revealed himself as Lord Vishnu, the God of preservation. Vishnu warned Manu that there would be a great flood that would submerge the world and destroy all living beings. Vishnu asked Manu to be the person to save humanity. Vishnu asked Manu to build a great ship and gather all the worthy sages, birds, animals and plants. Vishnu then promised to guide the ship and all its occupants to safety.

Manu did indeed build the ship and filled it with the important sages, birds, animals and plants. The rain began and it rained, and rained, and rained and rained. This was rain like nobody had ever seen before. The ship was tossing and turning on tumultuous waves amidst the thunder and lightening of the storm. Manu had to steer the ship but he had no idea where to direct it. As promised Vishnu, as matsya, the giant fish, steadied the ship from behind and lead it to safety.

When the storm subsided, Manu became the ruler of the new world and he replanted everything in a more mindful manner. Life went along splendidly for a while. However, over time, people began to forget about mindful living instead falling prey to maya – confusing the illusions of the material world for reality. Parvati (the wife of Siva) noticed this and asked Siva to share his wisdom of yoga in order that she might be able to help mankind.

Siva and Parvati retired to a private place so that Siva could impart the knowledge of yoga with Parvati. On a private deserted island he imparted the wisdom of hatha yoga which is the foundation for all forms of physical, mental and spiritual disciplines of yoga.

When Siva had finished imparting the wisdom of all of yoga to Parvati, they realized that one of the surrounding islands was in fact an enormous fish. The fish had also taken in all of the teachings. Siva then blessed the fish and Matsyendras emerged as the first master teacher in the tradition of hatha yoga.

It is said that Matsyendra went on to teach the yogis responsible for codifying yoga in the classic text, Hatha Yoga Pradipika. Matsyendrasana is practiced to honor the first teacher of yoga. The bent legs represent the fish’s tail, while the upright torso represents Matsyasana’s human torso and head.

Reflective Questions:
1. Are there aspects of your life that are drowning? How could you engage the energey of matsya to preserve or let go? What is worth preserving? What is worth letting go?
2. What “containers” in your life have you outgrown?
3. Remember back to a time in your life when you have been guided to safety.
4. After the flood receded Manu replanted everything in a more mindful manner. What aspects of your life might require a little mindful replanting?
5. Who has been your most important teacher? What did they teach you?
6. What have you learned from the teachings of yoga?