The Shiva Stories are from Tales from Shiva Purana compiled by H.G. Sadhana Sidh Das

Rama dwelled in the forest with his wife Sita and his brother Lakshmana. They lived on the banks of the river Falgu. One day they received news that Rama’s father, King Dasharatha,  had passed. Rama sent his brother to the nearby town to get the necessary ingredients to perform a Shraddha ceremony for their deceased King. Some time passed and Lakshmana did not return so Rama went to look for him and to get the ingredients. As noon approached Rama did not return either. The ceremony was to be performed by noon and so Sita did not know what to do.

In despair, Sita decided to perform the ceremony herself. She bathed herself in the river Falgu. She lit an earthen lamp. She made the offerings to her father in law herself. Immediately she heard a disembodied voice say, “Sita, you are blessed. We are satisfied.” Amazed, she looked around and watched a pair of hands reach out of the sky to receive the offerings. “Who are you?” Sita asked “I am King Dasharatha, your Father-in-law,” answered the voice from the sky. “But Rama and Lakshmana are never going to believe that hands reached out of thin air and accepted the offerings” Sita said in a worried voice. “They must,” replied the voice. “You have four witnesses” The first is the river Falgu, the second is the cow over there, the third is the fire, and the last one will be the Ketaki bush.”

Rama and Lakshmana returned from town and urged Sita to cook the ingredients quickly since there was very little time left before noon. Sita told them what had happened and of course the brothers did not believe her. Sita called upon her witnesses, the river Falgu, the cow, the fire and the Ketaki bush, but each denied they had seen anything. Sita sighed, decided not to argue with the men any further and began to cook the food. Rama made the offering to his ancestors.

Then that voice came from the sky again. “Why are you calling on us again? Sita has already satisfied us!” it said. “I do not believe that” Rama retorted. “It is true.” confirmed the voice. “Ask the sun God.” The Sun God confirmed that everything happened just as Sita had said. 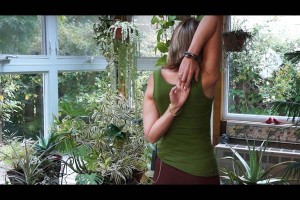 What can we take away from this story? Firstly Sita took action. She could have sat there waiting for Rama and his brother Lakshmana to return and for all the ingredients to be arrive to perform the ceremony. However she made to with what she had and performed the ceremony from her heart with what she had. Passionate, humble action from your heart is more so much more important than doing nothing at all. When I think back to starting Yoga with Melissa three years ago, who was I to start a weekly podcast and put myself out there as a yoga teacher in such a public way? Who was I not to? In the words of Marianne Williamson, “We ask ourselves, Who am I to be brilliant, gorgeous, talented, fabulous? Actually, who are you not to be?

For me this is a story also about the importance of truly listening with respect our whole hearts and undivided attention. Rama and Lakshmana dismissed Sita out of hand disbelieving that she could have possibly performed the ritual. They weren’t really listening to her. The flower, the river, the cow and the fire weren’t even paying attention to Sita and the amazing events that were taking place! As we move through our days the greatest gift we can give our loved ones and those we come into contact with is our listening ears and undivided attention.

In today’s class we will focus on opening up our hearts in service as well as our throat chakras with the intention of building up our listening skills. This practice focuses on heart openers and neck releases.

Thank you for making us Canada’s Most Popular Free One Hour Online Yoga Show.

Thank you for leaving your ratings, comments and testimonials at www.thankyoumelissa.com

For more great videos check out my membership site and become a member today https://www.melissawest.com/membership/membership-sign-up/